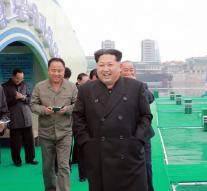 seoul - South Korea deals with the proposal of North Korea together to sit around the table. That made it South Korea's Yonhap news agency on Friday. The northern country will talk about further improvement of relations. The talks will be November 26 in the border town of Panmunjom take place, according to state news agency KCNA.

If the two countries actually talk to each other, it will be for the first time since they strengthen the ties in August agreements.