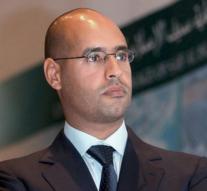 cairo - According to Libyan media, the son of the killed Libyan dictator Muammar Kaddafi, Saif al-Islam, is released from prison. The Alwasat message portal reported on Saturday that he benefited from a parliamentary amnesty scheme based in Tobroek.

Alwasat quotes a statement from the military police charged with the monitoring of Zintan's prison. Saif al-Islam left the city in western Libya immediately with unknown destination. Kaddafi's son was sentenced to death in 2015 for war crimes during his rebellion against his father.