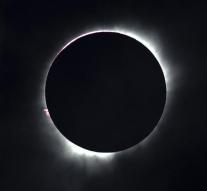 salem - As of 18:00 Dutch time, a solar eclipse will be seen today in the United States. In the state of Oregon on the West Coast, the sun disappears first behind the moon, to be completely obscured around 19.17.

The phenomenon then 'moves' slowly toward the east. The state of South Carolina on the East Coast is last in turn. There is the eclipse around 20. 46 pm at its peak. However, the weather is not as good at all: it's cloudy in almost the whole east of the US, so the eclipse will not be good to see.

Sun eclipses are a cosmic happiness. Mankind lives by chance in a period when the sun and the moon seem to be as great in the sky, allowing the latter to cover the first perfectly. In fact, the sun is many times larger than the moon, but they appear to be as large as our star is far removed from the earth than our satellite.

The moon moves slowly from the ground, which makes solar eclipses in a few million years no longer possible. Then the moon is optically too small to obscure the sun as a whole.