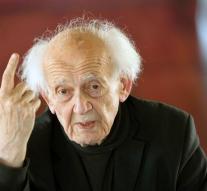 leeds - The Polish-British sociologist and philosopher Zygmunt Bauman on Monday at the age of 91 deceased in his hometown of Leeds. That has let his family know. Bauman became internationally known for his analysis and critique of contemporary life and culture.

He has fifty publications to his name. Important themes in his work are Holocaust, utopias, postmodernism, globalization, consumerism and the 'liquid modern society. The latter Bauman describes, among other things, in his book 'Liquid Modernity' in 2000.

Bauman, born in a Jewish but not religious family fled Poland twice. After the invasion of Nazi Germany in 1939, the family went to the Soviet Union. At the end of the war, Bauman service in the Red Army. Then in 1967 in Poland anti-Semitism flared up again, he moved to Israel to settle down four years later in England as a professor in Leeds.

Besides praise he received criticism, especially in his later work. It was found by many to essayist and little scientific.