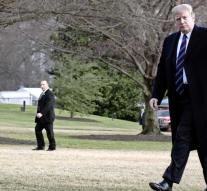 washington - President Donald Trump is in very good health and will probably stay that way throughout his presidency. The doctor from the White House reported this after the annual...

The 72-year-old Trump was examined in Washington by twelve doctors for four hours.

Last year it turned out that he has an elevated cholesterol level, for which he takes medication, and that he weighs 108 kilos. He was then advised to lose some kilos. Whether that has happened is not clear.