Home / Tech / Smallest transistor ever made 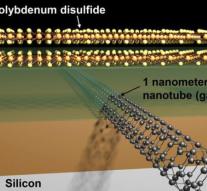 berkeley - US scientists have managed to make the thinnest ever transistor. The so-called 'gate' (connection) is only 1 nanometer thick. That is five times thinner than before thought possible, 20 times as thin as the best transistors that are now on the market and 50,000 times thinner than a human hair.

That the transistor can be so small, because the researchers did not use silicon. This material is in almost all electronic devices. Instead, they chose molybdenum for the substance.

According to the Berkeley lab transistor can ensure that Moore's Law continues to apply. This law says that the number of transistors in a circuit doubles every two years. In other words, every two years, computer chips to be twice as strong. The law is named after Intel founder Gordon Moore.

The transistortje developed by people from the Lawrence Berkeley National Laboratory in California and other institutions in the United States. The survey is Friday in the major science journal Science.