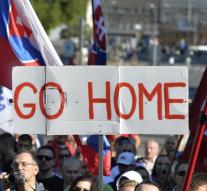 - The Slovak government will continue to oppose the distribution of refugees by the European Union. The safety of Slovak citizens is a priority. That, Prime Minister Robert Fico Friday about the attitude of his country.

In his view, increases the refugees to the risk of terrorism. Fico : " The Slovak government sees a clear link between migration and the horrors that terrorism brings with it. Several in the attacks in Paris involved terrorists demonstrably came to Europe via the so-called Balkan route, said the head of government.

" Now hundreds of thousands of refugees without adequate controls have entered the EU, it is quite possible that among them a large number of supporters of Islamic State is equipped and capable of similar attacks to perform ", said the Social Democrat. Who does not see the link between migration and terrorism, " dumb and blind ", he added.