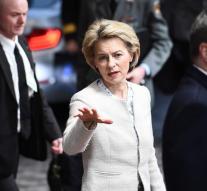 stuttgart - German Defense Minister Ursula von der Leyen considers a sharp increase in the military budget in accordance with US wishes regarding NATO members feasible. In 2014 it was agreed that defense spending in ten years would be raised to 2 percent of gross domestic product.

' That is realistic, thoughtful and also to do '', the CDU politician said Wednesday during a podium discussion in Stuttgart at the invitation of a local newspaper. Her SPD colleague Foreign Minister Sigmar Gabriel called that goal unrealistic recently. Germany currently spends 1.2 percent of GDP on defense. To bring it to the required level, according to him, 25 to 30 billion euros per year.

The Netherlands also has to make a lot of catching up to meet the standard.