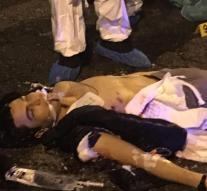 milan - A photo of the shot Anis Amri has surfaced Friday afternoon. The suspect in the attack on the Christmas market in Berlin on Thursday night was shot dead by a policeman in Milan.

When the terror suspect was asked during a routine check at his papers, he shot two cops. Then they shot him.

The policeman who shot Amri, was only nine months in office.