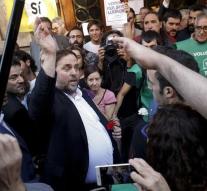 barcelona - Catalan separatists have acknowledged Thursday that the actions of justice against the organization of a referendum on independence have caused problems for their realization.

The Catalan Deputy Prime Minister Oriol Junqueras said to Spanish media that it is clear that 'we can not vote as we have suggested. 'He complained that the Spanish state has changed' rules of the game 'and' for enormous problems 'for holding a referendum on October 1.

On Wednesday, the Spanish police arrested a series of buildings of the Catalan regional government and did searches. Fourteen arrests were made. The police and Guardia Civil acted in the context of a criminal investigation by a judge in Barcelona. The intended referendum is contrary to the law of the Spanish judiciary.