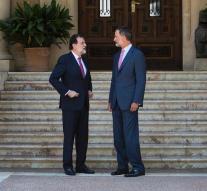 barcelona - Leading separatist politicians in Catalonia urged in a letter to King Felipe VI and Prime Minister Mariano Rajoy on a dialogue on a solution to the Catalan issue.

However, according to the Spanish Government and the Supreme Court, this is contrary to the law. Madrid legally blocks the referendum, threatens prosecution of government officials working on it and wants to prevent the regional government from separatists from using tax money for their referendum.