Home / World / Search for Madeleine McCann on the backburner 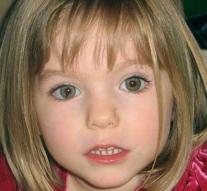 london - The British police investigating the disappearance of Madeleine McCann put on the backburner. The number of detectives from the police in London to investigate the matter, has been reduced from 29 to four.

The BBC reported Wednesday that only few leads to investigate. Madeleine McCann vanished before her fourth birthday on May 3, 2007 from an apartment in Praia da Luz in the Algarve in Portugal. The parents, ever self suspects, accept the decision as inevitable. The investigation led among other things to 1338 statements and collecting evidence in 1027 but brought no result on the circumstances of the disappearance.

Few things were as much attention as that of Madeleine. She was seen all over the world and clues about her whereabouts were countless. But nothing led to a showdown. The referral commissions, including brought together by businessmen and newspapers has risen to nearly 4 million.