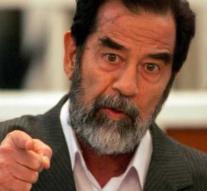 london - Londoners are puzzled after a memorial for the Iraqi dictator Saddam Hussein has appeared on a bench in their city. The text 'In loving memory of Saddam Hussein, 1937-2006' is on the gold-colored plate. It is not clear who is responsible for it, reports the BBC.

Local residents reacted angrily to the sign in a closed Facebook group. Victoria Richards walked against the sign on Sunday and put a picture of the strange scene on Twitter. Her message was shared thousands of times. She speaks of a 'sick joke'.

The Iraqi leader was born in April 1937 and was hanged in 2006 for crimes against humanity.