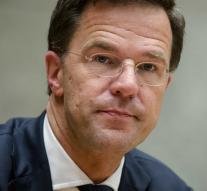 brussels - Prime Minister Mark Rutte Thursday morning attended summit in Brussels ahead of the EU summit of government leaders and heads of state. It was uncertain whether he would be here for the debate on the Teeven deal, Wednesday evening in parliament. The Prime Minister survived a motion of censure.

In preliminary consultations on the Austrian embassy are beside German Chancellor Angela Merkel and President of the European Commission, Jean-Claude Juncker also countries like Belgium, Sweden, Finland and Greece present. The Turkish prime minister Ahmet Davutoglu joins the table.

The leaders discussed include the proposal in Brussels to take voluntary refugees now in Turkish camps. Some EU countries are not willing to accommodate Turkey if that country ensures that fewer refugees coming to Europe.

The Austrian Prime Minister Werner Faymann has called a number from 40 000 to 50 000 recognized refugees that Europe could receive. Rutte wants to first see that Turkey can keep the border shut before he takes this and position.