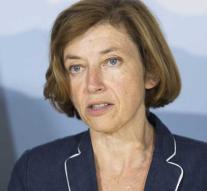 According to Parly, that happened at about 36,000 miles from the earth. A Loetsj-Olimp satellite flew to the satellite used by the armies of France and Italy. The Russian probe came so close 'that everyone thought he was trying to intercept our communication,' said Parly. She added: 'We are in danger. The interests are great. This is an absolute priority. 'According to Parly, not only Russia becomes more aggressive in space, but it also applies to the United States and China.