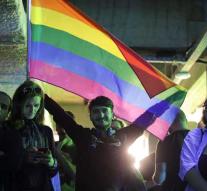 bucharest - The Romanian referendum on a constitutional amendment regarding gay marriage failed. Although the more than 18 million voters had two days to cast their votes, the required turnout of 30 percent was not reached by far. Five minutes before the closing of the polling stations, only 15.21 percent had reported, when they closed on Sunday night, according to the electoral council, this had grown to 20.41 percent.

The plebiscite was an initiative of the Coalition for the Family, which horrified the fact that people of the same sex marry each other. To be able to ban that, the text of the law had to be adapted. It now only refers to 'husbands' to indicate a married couple. The conservative, believer and homophobic Romanians wanted to replace that with a clear 'man and woman. '

However, they did not take the trouble to actually agree in large numbers. On Friday, a polling station predicted a turnout of 34 percent, with nine of the ten voters for a boycott of man-man or woman-wife marriages.