Home / World / Rome fears of terrorism in the Holy Year 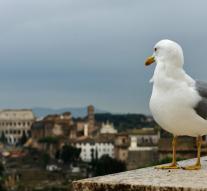 rome - The government of Rome fears that the Italian capital since the beginning of the Holy Year on December 8th goal of Islamic terror attacks will be. It is the first so-called jubilee year which the Catholic Church celebrates since the creation of Islamic state and that is why the big worry in the eternal city , writes the Italian daily La Repubblica on Monday.

The Jubilee Year is usually celebrated once every fifty years . The last time was in 2000. This time it's an extra celebration on the initiative of Pope Francis, in which mercy is central.

With this special year is the fiftieth celebration of the closing of the Second Vatican Council recalled in 1965. Rome expected from December 2015 to November 2016 thirty million pilgrims from around the world.

Since its propaganda IS in Rome as the center of Christianity again and again to attack purpose equipment, the safety authorities are very wary, according to the city prefect Franco Gabrielli.