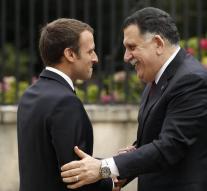 celle - The Prime Minister of the Internationally-recognized Government of Libya, Fayez Al-Sarraj, and the Commander of the Armed Forces, Khalifa Haftar, have agreed on a conditional ceasefire. This is stated in a joint statement issued after negotiation under the auspices of French President Emmanuel Macron.

In the statement, the two kemphanes are stuck to a ceasefire and promise to refrain from violence, 'other than strictly for terrorism'. The ceasefire must be the prelude to elections under the auspices of the United Nations.

In Libya, chaos have been ruled since the uprising that led to the fall and death of dammator Muammar al-Kaddafi in 2011. Earlier attempts at peace ended the rivalry between the various armed groups in the North African country.