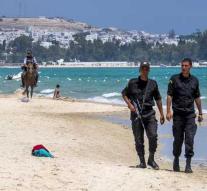 tunis - The security services in Tunisia have killed a senior al-Qaeda member in the Islamic Maghreb (AQIM). According to a government official, Algerian Bilel Kobi was the right hand of Abu Musab Abdel Wadoud, the leader of the North African branch of the terrorist network. He was shot down during an ambush at the border with Algeria.

Tunisia has stepped up the fight against terrorists in the country since 2015. That year, an extremist in a hotel complex in the Tunisian resort of Sousse killed 38 vacationers before he was shot dead. The country fears the return of, among others, Syria visitors. In recent years more than 3,000 Tunisians have traveled to Libya, Iraq and Syria to fight for jihadist groups.