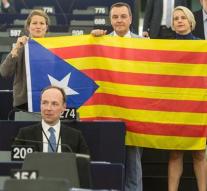 barcelona - During the referendum in Spain on separation of Spain, 90.18 percent voted for and 7.83 percent against. The turnout was about 43 percent, which amounts to almost 2.3 million voters.

This is evidenced by the official results announced by the regional government on Friday.

The controversial referendum, which was forbidden by the court, was accompanied by riots. Police officers from Madrid tried to prevent people from voting. There were about nine hundred people injured.

A representative of the government in Madrid made his apologies for the violence that the police used.