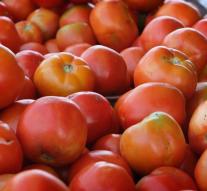 gent - Tomatoes taste more delicious when grown with salt water, researchers from Ghent University indicate. Due to the salt, the tomatoes absorb less moisture, resulting in more sugars in the fruit. The water absorption of the plants is better controlled by continuous measurements of sensors by adjusting the salt content than by giving more or less water, scientist Bart Van de Wal explains.

Honey tomatoes from the Netherlands are very sweet, because the growers are especially keen on the taste, Van de Wal gives an example. 'Because of this, the tomatoes are a lot smaller and bring them less. This is in contrast to some large, tasteless tomatoes in Belgium, where growers focus on quantity and not so much on quality. By adding salt in the water, we can now combine the best of the two in large and tasty tomatoes. '

The researcher of the Faculty of Bio-Engineering studies goes into 'play' with the amount of salt in order to make the effects 'even better'.