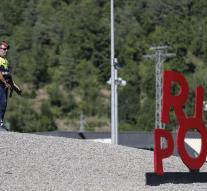 barcelona - The Spanish police are investigating the contacts with Ripoll's imam, the alleged leader of the attacks in Barcelona and Cambrils, with members of Islamic State in Belgium, Morocco and France. Police sources said against the newspaper El País that Imam Abdelbaki Es Satty was probably rationalized during one of those trips.

SEE ALSO: Imam As-Satty picked up religious fire and Ripoll had no idea

The imam of Ripoll was held in Ceuta, a Spanish enclave in North Africa in 2010. Because of the smuggling of 12 kilos of hash. He ended up in prison for four years.