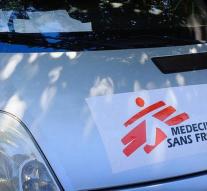 milan - Italian justice is investigating MSF. On Saturday, a source of justice reported that the investigation into rescue operations of migrants on the coast of Libya has expanded to the international aid organization.

On Wednesday, Italy seized the Dutch-flagged ship Iuventa of the German organization Jugend Rettet because the organization would promote illegal migration. The German volunteers would save migrants while they were not in direct danger and would communicate with Libyan human traffickers.

A spokeswoman for MSF says not to be officially informed about the judicial investigation. The relief organization refuses to sign a code of conduct for rescuing migrants, just like Jugend Rettet. Italy says that the code of conduct seeks to better co-ordinate shelter, but according to the aid organizations, some measures of the Code endanger human life.