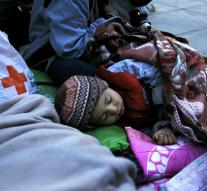 passau - The number of refugees traveling through Austria to Germany remains high. Early Saturday morning were a thousand people at the border crossing with the German town of Passau. Friday more than 5,500 refugees have crossed the border at three locations in the region.

Austria and Germany have agreed to monitor the flow of refugees by setting up at five border crossing checkpoints. It is intended that all refugees at five points which come in Germany. In this way Germany can take them to emergency shelters from there. Near Passau are about a hundred buses ready.

In the Greek port of Piraeus in 24 hours nearly 8700 migrants arrived. They had come up through the Greek islands of the Aegean Sea and have been brought to the port near Athens. The Greek government before the end of the year arrange shelter for 30 000 people.