Home / World / Refugees from North Frans kamp without a trace 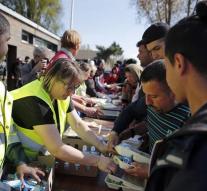 gent - Hundreds of refugees from Monday burnt camp in the northern French Grande-Synthe are missing. The governor of Nord-Pas de Calais has three halls where the affected people were accommodated closed Thursday, the Belgian NGO Humain reported Friday morning.

'This led to complete chaos,' said a spokesman for Humain, who was on site at the time of the evacuation of the halls was announced. 'Lots of choice, the people did not. Whether you got on the bus to another reception center if you disappeared. The humanitarian mess in the region is getting bigger on. '

According Humain is a large number of people missing, including two hundred Afghan refugees. Meanwhile threatens to establish a new makeshift camp in Calais. 'Someone walked around and recorded names and the number of family members. We saw how families money paid for a spot. 'The previous 'jungle' in Calais was cleared late last year.

The organization states that it is obvious how hard grip of traffickers on refugees who dream ever to cross to England. 'It is high time that the French government is structural and humane solutions. '

The fire in the camp in Grande-Synthe broke out Monday after clashes between Kurds and Afghans. Ten people were injured. The camp of wooden huts set up by aid organization Doctors Without Borders to give migrants a decent shelter. Previously they lived in tents.