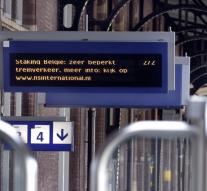 It is the eighth day of strike action this year on the Belgian rail. It's Monday and Tuesday to regional strikes, organized by the Walloon branch of the socialist union ACOD Spoor. Unlike Monday Tuesday also creates nuisance in Flanders. High Speed ​​Carrier Thalys advised travelers last week to postpone their trip to Belgium and France.

The union is protesting against government plans that could strip the working conditions of railway staff.