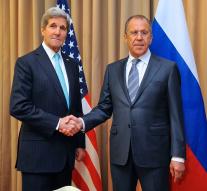 moscow - The foreign ministers of Russia and the United States, Sergei Lavrov and John Kerry, speaking to each other Wednesday, January 20th in Zurich. They are talking mostly about the war in Syria, but also on the crisis in eastern Ukraine. This, the Ministry of Lavrov on Thursday.

The United Nations hope to begin January 25 in Geneva with a new peace conference for Syria.