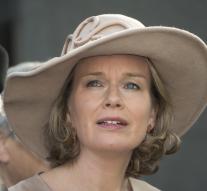 - The Flemish television news is being sued by Child Focus , which Queen Mathilde is honorary chairman . This is because broadcaster VRT showed explicit child pornography.

Possession and distribution of them is punishable, even in a journalistic context. VRT that the images are not sent out on purpose, has apologized, but Child Focus is an indictment as filing was announced Friday.

Queen Mathilde took last year the honorary presidency of her mother Queen Paola, who had held the position for fifteen years. " As a mother of four children growing up, I feel particularly appealed to me. You can truly count on my support ", Mathilde said when accepting the position, which they promised it would help the organization both before and behind the scenes.

The royal family has been closely involved with the organization for missing and sexually exploited children is partly a consequence of the sensational killings and disappearances in Belgium of underage girls in the late nineties. The topic has always been on the agenda, which also explains the fierce reaction of Child Focus.

" The VRT committed a crime. Our organization has been engaged for years in the fight against child pornography, that is why we have decided to make a complaint for possession and distribution of images of child sexual abuse to be submitted to the Brussels police, " said Heidi organization De Pauw.