Home / World / Putin most powerful person in the world 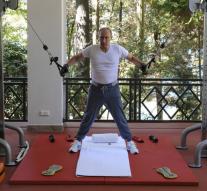 - Russian President Vladimir Putin is the most powerful person in the world. At least, according to the US business magazine Forbes . Putin is number one on the annual list of the world's most powerful people.

On second place, the German Chancellor Angela Merkel. US President Barack Obama has to do with a third place. Pope Francis and Chinese President Xi Jinping make the rest of the top five full.

There is no Dutchman in the ranking of Forbes.