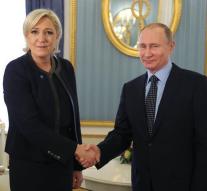 versailles - Russian President Vladimir Putin justified the receipt of the nationalist candidate Marine Le Pen in Moscow shortly before the French presidential election. It was no attempt to influence, Putin said Monday after talks with the new French president Emmanuel Macron in Versailles.

The fact that Le Pen advocates the preservation of national identities in Europe is a good thing, said Putin. The leader of the Front National had been in Moscow more often and has always called for good relations with Russia. 'Why should we refuse her?' Asked Putin.

The Russian president also said that it was not proven that Russian computer hackers tried to influence the polls in France, shortly before the decisive ballot papers that could put Macron in a bad light. Therefore, he did not want to respond.