Home / World / Putin does not see Erdogan on climate 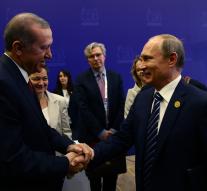 - Russian President Vladimir Putin does not intend to meet with the Turkish President Recep Tayyip Erdogan at the international climate summit in Paris Monday. A spokesperson of the Kremlin said. A conversation with US President Barack Obama is "likely".

Turkey pulled out last week, a Russian fighter down to the border with Syria. The relationship between the two countries has since been sharp.

The body of a Russian pilot who was killed while is Monday flown from the Turkish capital Ankara to Moscow. Ankara held a military funeral for the pilot, in the presence of the Russian ambassador and several military officials.