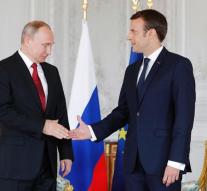 Macron receives the Russian leader in the Grand Trianon, a 'pavilion' in the garden of the Versailles Palace. The property was built for the French king to retreat from the busy and densely populated main building.

In the Grand Trianon there is currently a painting exhibition devoted to the visit of Tsar Peter the Great (1672-1725) to France. That was in 1717. Putin and Macron therefore celebrate the three hundredth anniversary of Russian-French diplomatic relations. The visit of Peter the Great was arranged through The Hague where Russia had much longer relations.