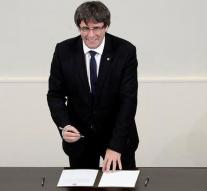 barcelona - Catalan leader Carles Puigdemont and other regional politicians have signed a document on Tuesday evening in which Catalonia declares independence from Spain. It is unclear whether that legal value has any value.

'Catalonia is restoring its full sovereignty today', inter alia, in the document, which is called a 'Declaration by the Members of Catalonia'. 'We urge all countries and international organizations to recognize in the Catalan republic as an independent and sovereign state. We call on the Catalan government to take all necessary steps to make this declaration of independence possible and fully effective. '

Puigdemont said earlier in his speech that the effect of the statement is suspended to create time for negotiations.