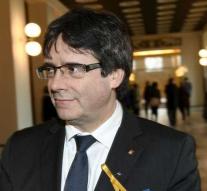 barcelona - The former Catalonian government leader Carles Puigdemont will report to the police on his visit to Finland, as soon as the extradition request issued by Spain against him is received.

This is what his lawyer Jaume Alonso-Cuevillas told Spanish media. According to him it is just like in Belgium, where Puigdemont has lived since his flight from Spain. Spain had withdrawn a previous extradition request that had been sent to Belgium, after legal tug-of-war again.

Puigdemont is wanted in Spain for a series of offenses committed when he, as the regional prime minister, wanted to separate Catalonia from Spain in October with an illegal referendum. The separation was not only contrary to Spanish law, but also with the rules of the Catalan parliament.