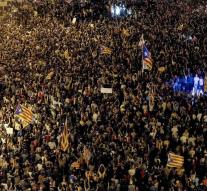 barcelona - Angry Catalans went to Barcelona on Wednesday night after the city has been the scene of demonstrations throughout the day.

The reason is the detention of fourteen politicians and officials of the Autonomous Catalan Government in the morning by the Guardia Civil. The police also took about nine million ballot papers for the referendum on Catalan independence. The Spanish judge has forbidden the referendum, but the Catalans are still implementing it for the time being.

The streets of Barcelona were packed with countless protesters. The own Catalan police, the Mossos D'Esquadra, called on the demonstrators to prevent violence and destruction.

Spain's spokesman Mariano Rajoy called on television not to let the Catalan leaders continue on the referendum because it violates the laws. The Catalans are completely different. In Barcelona, ​​Wednesday was demonstrated throughout the day.