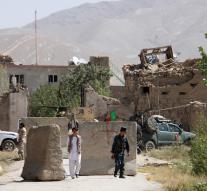 kabul - The Afghan authorities have 150 " dangerous prisoners " taken from the southern province of Helmand. This should prevent the extremist Taliban movement they give the opportunity to escape.

The Taliban have recently twice a major jailbreak put on their name. So overpowered fighters end of September, the prison guards in Kunduz, leaving about six hundred prisoners could take the legs. Also in the city of Ghazni was stormed a prison successfully.

The authorities fear that the Taliban want to repeat that trick in Helmand, where last week there was still fighting outside provincial capital Lashkar Gah. It was then, according to a police spokesman decided the most dangerous inmates to convey this weekend to the capital Kabul.