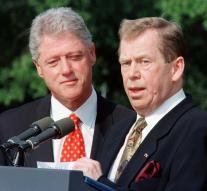 prague - In the Czech Republic is a diary of Vaclav Havel surfaced that the former president and writer in 1977 in the prison kept. The communist regime kept him at the time as a dissident five months stuck in a provisional judgment and in that period he wrote a script full.

The diary was found by David Dusek, a grandson of the author Zdenek Urbanek (1917-2008). The writing was in the estate of Urbanek, who was a close friend of Havel. The notes appear in October as a book, when Havel eighty would have been. The book describes the prisoner include plans for plays after his release and administering,, psychoactive medication 'of some detainees.