Home / World / Prince Harry in the footsteps of mother Diana 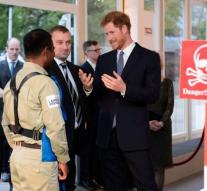 - For the cost of a star football player each year worldwide could be freed within ten years of landmines. This call got the British Prince Harry in the footsteps of his mother Diana. Who played twenty years ago, in the months before her death, a crucial role in the first major ontmijnakkoord which was previously closed.

Halo Trust and Mines Advisory Group are the two main charities engaged worldwide in clearing landmines and other explosives are now being stored in refrigerators or Korans in war zones.

The organizations think with $ 100 million extra the world to make my free within ten years. A large part of it is accounted for by the British. This triple the contribution over the next three years to 100 million pounds.

In an emotional speech in the Orangery of Kensington Palace, the former home of Diana, Prince Harry stopped by the efforts of his mother. 'There was at that time criticized her decision to deal with the dangers of landmines. Some felt that they exceeded the barrier towards political interference. But it was something that touched her heart. She pulled the fate of the innocent victims and wild on her way to contribute. '

Foreign Minister Bert Koenders was representing the Netherlands attended the meeting which was stood still at the 20-year anniversary of the landmine agreement. 'It was a nice personal speech of Prince Harry. It is good that he is now committed to the same goal. It remains important. A few weeks ago I experienced when visiting Mosul which can cause misery landmines and contemporary versions. '

The Netherlands also increased its annual contribution to the organization. 'We already paid quite a lot, 'he said. 'But we also see the importance of this initiative and increase our contribution by 2 million to 47 million annually. '