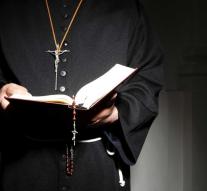 toulouse - In the southern French village of Saint- Lizier is a priest embezzled more than a quarter century money from the parish. He appropriated between 1987 and his retirement in 2013 an estimated 700,000 euros. French media reported Tuesday that the now retired octogenarian cleric must answer in January in Foix court. He has the facts are known.

According to authorities is still 656. 000. traced to bank accounts of the accused. The money is partly the contributions to the church by parishioners and the sale of sacrificial candles in the church building.