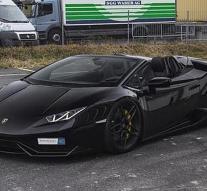 zurich - A peperdure and supercell Lamborghini has disappeared smoothly from Swiss Zurich. A 'nice, neat woman' took the car for a 'business trip' but did not return to the rental company. The woman and the exclusive bolide disappeared with the northern zone.

The owner of the company has offered 5,000 Swiss francs (around 4520 euros) to the winner of his Lamborghini, an exclusive black Spyder worth 280,000 euros. There are many people who want to get the reward in their pocket, but for the time being, the tips remain unsuccessful. 'It was a nice, friendly lady and she also had some luggage,' said the landlord who suspects the woman showed a false ID. He hopes that the insurance will reimburse him.

When the car and the tenant did not return at the agreed time, Schweiwiller Automotive Luxury Car Rental's boss was most likely to suspect. He decided to track the car with GPS tracking. When it turned out that the Lamborghini, which could reach a top speed of 325 kilometers an hour, had made a journey of over 1000 kilometers from Zurich to Strasbourg and then driven through Dover to London. In the British capital, the car was quiet at an Ikea. Then every track is missing. After the car was in London, the GPS transponder was removed in the car.

The Swiss police suspect that the friendly lady has been an intermediary in the theft.