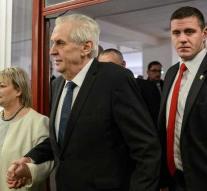 prague - The enthusiasm for the decisive round of the presidential election in the Czech Republic is great. The current president Milos Zeman aspires a new term and takes on the liberal professor Jiri Drahos. On the first day of the ballot, the turnout was higher than two weeks ago in the first phase.

According to the Czech broadcaster, about half of the 8.4 million voters had already used their democratic rights on Friday night. The polls point to a neck-and-neck race, in which Zeman points to the lack of political experience of his opponent and Drahos calls for a fresh wind and a choice for Europe.

The polling stations are now closed. Czech citizens can return there on Saturday from 8.00 am. They have the time until 2:00 PM. The president represents the Czech Republic abroad, plays a role in the formation of government and appoints members of the constitutional court.