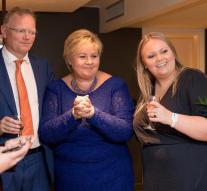 With over 90 percent of the votes counted, the coalition of Solberg's party Høyre and the right-populist party FRP with the supportive support of two smaller parties, the Christian KRF and the Liberal Party of the Left, count on 88 of the 169 seats.

Solberg's party took 45 seats and the FRP 28. Støre became the biggest with his 49-seat Labor Party. However, over left he can not form a majority coalition.

For Solberg it is a historic victory. It is the first time since 1985 that a conservative-led government has won the subsequent elections.