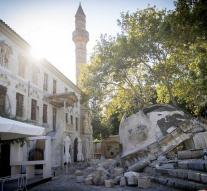 kos - Tourists and residents of the holiday island of Kos should take into account the possibility of aftershocks and new earthquakes in the next month and a half. That says the Greek seismologist Christos Papaioannou of the Institute of Engineering Seismology and Earthquake Engineering in Thessaloniki.

During a visit to the island on Sunday he said he was unable to settle the holidaymakers after Kos was hit by a quake (6/5) on Thursday night and Saturday night was upset by a fierce aftermath of 4. 4. 'For the next fortnight there is an increased chance of firing in the area between Kos and the Turkish coast,' said the seismologist after a discussion with Kos Town Council.

The Dutch do not have to worry about their safety. 'There are also Dutch tourists and businessmen going to Japan?', Says Papaioannou. 'There are the joints heavier, more numerous and harder than here. '

The ordinary life in Kos has recurred since many tourists still prefer to spend the night in a sun lounger by the pool or in a beach chair at the seaside. Nor are the Greeks themselves reassured. In the parks in the tourist town are tents, and residents' mattresses are ready for the coming night. A single person sleeps on the balcony or in the porch of his home.

Local deputies see the earthquake as a nasty contradiction in a resilient tourist market. Last year, tourists suffered greatly from the influx of thousands of refugees to Kos. Now that stream is virtually dried up, it seemed to be an excellent summer season. Hence, many Greeks with chagrin respond to messages about the quake.

Assistant Adriaan Breakthrough of the Dutch party cafe Orange Camelot in the entertainment district of Kos regrets the temporary dip. His cafe is just around the corner of Cafe White Corner, where Thursday swept a Swede and a Turk on the terrace under a collapsing facade and disappeared.

The party cafe runs like before. 'Everyone is shocked, but besides a few collapsed old buildings, there is still little going on,' said the Groninger, whose colleagues are joking that he is an experience expert when it comes to earthquakes. 'If this quake in Groningen had taken place with the same force, there would have been much more damage. '

However, at the local establishment of travel agency Corendon, work is still being done to guide the aftermath of the quake. Guests who wanted to go home have since left. According to Daisy Mijnals from Corendon, there are no people who want to go home with the next flight anyway. Sunday evening, a fully booked flight from Corendon arrives at Kos airport with 189 passengers. According to Mijnals, no-one has canceled his flight to Kos.