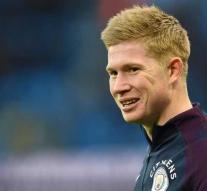 leuven - Kevin De Bruyne has the police behind him. At least, the lookalike of the Belgian international. The Leuven police are looking for the duplicate of Manchester City's football player, because on 16 March he would have been involved in a bicycle accident in the same city.

The 'Leuven Kevin De Bruyne' collided with his racing bike against a person with a red bakfiets. The latter was therefore taken to the hospital. But neither party called the emergency services.

On Facebook, Studentenflik Police Leuven says that bystanders describe the man on the road bike as the 'Limburg Kevin De Bruyne'. 'Which (according to witnesses) Limburg Kevin de Bruyne lookalike student recognizes this and can give us some more information about the accident?'

However, they let you know that the lookalike has been waiting after the accident. 'So this is not a flight crime because the man has been waiting well, but for some reason the police did not get involved. We need the data from the man for the further processing of the paper shop, 'said Commissioner Marc Vranckx to Het Laatste Nieuws.

No useful tips have yet been received.