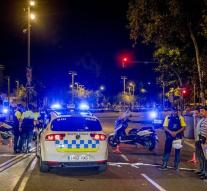 barcelona - The Spanish authorities suspect that eight people were involved in Thursday's attacks.

They would have been planning an attack with gas bottles, reports a source at justice. That confirms the messages that came out earlier, about a link with Wednesday's explosion in the city of Alcanar.