Home / World / Police: Do not share images of the attack 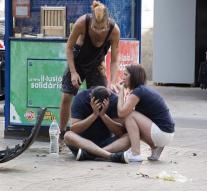 barcelona - The police in Barcelona are asking everyone not to share photos and videos of the attack in the center. People have to leave the area, stay away, and avoid the emergency services.

People can tell people and friends on Twitter via the hashtag #RedesSociales that they are safe, police quarrel.

After the attack, massive films with victims were shared on social media.