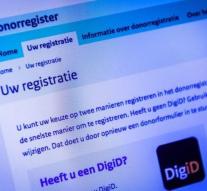 The doctor agrees with the Hague disciplinary court that there should be better communication with donors or relatives about transplant procedures. 'They must know what a donation entails, perhaps in detail, so that there are no misunderstandings about what is being taken away from the donor. '

On Tuesday, the disciplinary court ruled in a rumor case where an Alkmaar surgeon was accused of 'organ robbery' by ancestors of an 18-year-old girl from Berkhout. The judge released the doctor. Apart from kidney removal, other tissues were also removed, such as spleen parts and single veins. This caused anger with the relatives because they had not been told in advance.

According to Groningen's transplantation surgeon Hofker, in the almost always difficult conversations with relatives, even better people can be scrutinized who can handle people in their deepest sorrow. 'It is being tried and understood to tell people as much as possible. But admitted, we may have been too paternalistic to relatives for too long. For example, we limit the information to what is considered to be 'for their own good.' What can people do or not in sad conditions. But times have changed. However, the depth of the conversations can vary greatly. Yes, I am actually in favor of more accurate information so that no misunderstandings are possible. '

Sijbrand Hofker calls attention to more detail in the information provision 'the big profit' of this disciplinary case in The Hague. The Dutch Transplantation Foundation (NTS) recently announced, on the basis of the drama in Berkhout, on her website more insight into what is happening throughout the process of organ-taking.