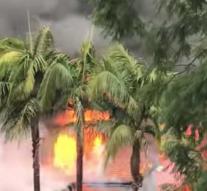 yorba linda - In the Californian town of Yorba Linda, just east of Los Angeles, a plane crashed into a residential area on Sunday afternoon. In addition, at least two homes have been caught on fire.

On video footage of witnesses you can see how the flames shoot from the roofs. On the street are debris of the device, according to local media a Cessna 414A, which had taken off from the nearby Fullerton Municipal Airport.

How many people were on board is not known. Also why the device crashed and whether there are victims to regret, still has to be clear. The twin-engine Cessna 414A has a one-man or two-man crew and can carry up to eight passengers.