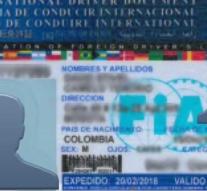 bad bentheim - The cross-border police team of Germany and the Netherlands picked up a 26-year-old man on Tuesday afternoon who, presumably proudly, showed an international driver's license to officers. Stupid, it turned out, because there is no such thing at all.

The German police have a real term for such documents: a 'Fantasie-Führerschein'. That 'does not even look like a real driving license', according to the police, and presumably was simply ordered on the internet.

The 26-year-old Colombian came from the Netherlands and drove to the German border, where he was stopped. His mistake is extra stupid, because his co-driver did have a valid driver's license.

After the police told the stupid perpetrator that he was going to be prosecuted, the co-driver crawled behind the wheel so that the couple could continue on their way.