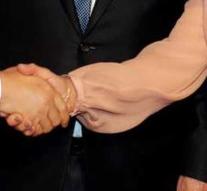 koblenz - An Islamic policeman who refused to give a hand to a female colleague in May 2017 must pay a fine of 1000 euro. The official made religious objections during his promotion party in the German town of Montabaur (Rhineland-Palatinate). According to the State Ministry of Justice, he accepted the congratulations of the woman by making a small bend with his hand on his heart.

The incident caused a stir all over Germany. As an employer, the state decided not to dismiss the policeman after he had promised in writing that she would shake hands with women from now on. The Muslim agent signed a statement stating that he recognizes the liberal-democratic state system and will regard women without exception or reservation as equal.

If he does not keep to the appointment, then he flies out to the police according to the authorities in Koblenz.